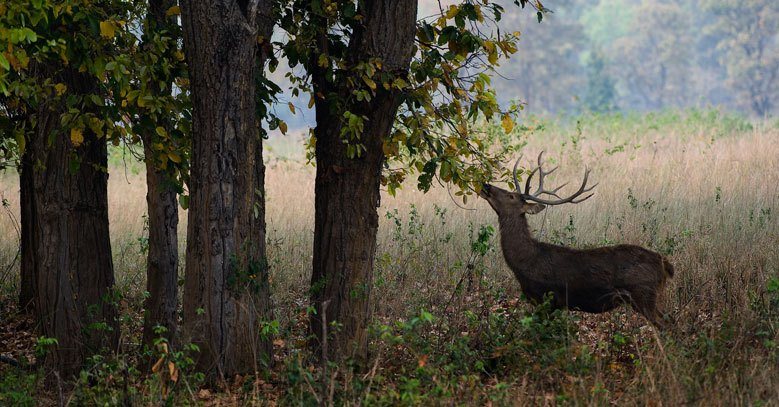 Ameristep is one of the biggest names in hunting blinds, and their most popular item is the Care Taker blind. But they have a wide selection of other blinds, too. Although not as well-known as the Care Taker, the Element brims with cool features. Here’s a closer look.

Like all the Ameristep blinds, the Element is durable. The 100% polyester shell fabric has a ZS3 carbon-enhanced coating which helps reduce scent, noise, and sheen. It’s a nice combination of durability, water resistance, and breathability.

An interior coating of ShadowGuard reduces shadows and silhouettes when you’re inside the blind. Between the ZS3 coating and the ShadowGuard, you can move around normally within the blind without worrying too much about alerting game.

At  75 inches wide and 67 inches tall , the blind is pretty big. Three adults can fit inside comfortably (the Care Taker fits two).

However, it’s also lightweight and portable. When folded, it slips into the included backpack. Plus, it weighs just 18 pounds. You should have no problem carrying it through the woods all day.

Setup takes just a minute a two. This is a spider hub blind, which is generally considered one of the most solid types. It has a boxy shape with four walls.

Spider hubs are known for their  stability and quick setup . Each panel of the blind has a pop-out hub with metal stamping. Setting it up takes just a few minutes.

New hunters often underestimate the spider hub. After all, the design looks relatively simple. Many people assume it isn’t sturdy because of its weight, but a spider hub will stay in place in all sorts of weather including rain, wind and even snow.

The Element has a whopping ten windows. You’ll be able to see in every direction. Each mesh window has a gun port for easy shooting. I liked how the blind had ports on every side, including the door side. A door-side port is rare in a blind, but it’s helpful for shooting in brush.

The last feature which stands out (well, metaphorically) is the camo. It’s Mossy Oak Breakup, which will fit into forests and other wooded areas pretty much year-round. You can also use the included brush loops to add foliage to the outside of the blind.

What We Wish was Different

Compared to other spider hub blinds, this one is somewhat cumbersome. That’s just an unfortunate trade-off due to the large size. But  folding it down can be awkward .

Plus, the backpack strap isn’t very sophisticated. It’s barely more than a shoulder strap. The construction isn’t up to the same level of quality as the blind itself.

The Mossy Oak Breakup Camo didn’t have me completely sold, either. While it’s great in certain conditions such as fall,  the blind will stand out when there’s snow on the ground . It’s also not ideal camo for areas with an abundance of greenery.

Finally, I had two rather significant problems with the mesh over the windows. First, it’s hard to see through in low light. But if you remove the mesh, game will likely be able to spot you.

My other issue with the mesh is that it’s held in place by Velcro. Adjusting the mesh makes a pretty loud noise which will likely scare away game.

Overall, this blind is a great choice for three people to share. It’s also a fine option for two people who want plenty of elbow room. But if you typically hunt alone, or don’t mind being relatively close with your hunting partner, you might prefer the Care Taker blind.

The Care Taker is just a bit easier to use and carry, but still has the same durability and quality construction as the Element.

What Other Customers Say

Generally, owners of this blind like how easy it is to use. Stacy F. praised the fast, simple setup. As a bowhunter, she also liked the vertical windows on the corners of the blinds.

Foster J said he’d been using this blind for many years. However, he  cautioned against using it in heavy snow , as the roof can sink in. I didn’t experience this problem, but it is something to keep in mind.

Other customers did have some issues with Ameristep. W.R. Brown said he was unable to find replacement parts. He also said customer service was difficult to reach.

By far the most common complaint was about the Velcro straps. User “Notneb” said that not only did the straps make a lot of noise when used, but the mesh was also hard to see through, especially in low lighting conditions.

As with other Ameristep products, the main selling point here is  quality construction . The ZS3 carbon coating and polyester shell help conceal sights, sounds, and noises. You don’t have to worry about accidental tears or other damage.

Plus, like all Ameristep blinds, setup is simple. You can carry the 18-pound blind with you using the included backpack strap. Because it’s a spider hub, it takes just a  few minutes to unfold and put in place .

You’ll want to make sure the Mossy Oak camo print is suitable for your preferred hunting ground. It’s not the most versatile style, and it’s  not the best choice for winter hunting , and the blind doesn’t handle snow buildup very well.

The Ameristep Element is the #3 choice in our list of best hunting blinds.

The Ameristep Element is a must-buy if you want a high-quality blind which can fit up to three people. You’ll stay concealed from game without feeling cramped or claustrophobic. It has all the benefits of the popular Care Taker plus extra room. 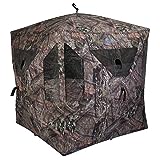