Barronett is a well-known manufacturer of blinds, chairs and other hunting accessories. They use advanced tech to design gear which addresses the specific needs of game hunters. The Big Cat 350 hub is one of Barronett’s biggest deer blinds. Here’s an in-depth look at whether bigger really is better.

The most prominent feature of this blind is, well, how big it is. The total footprint is  70 inches by 70 inches. It’s 6’6” tall at the center . Most people can stand at their full height.

The blind can comfortably fit three grown adults. Everybody should have plenty of room to stand, stretch and move around. You should also have plenty of space to draw a bow or aim a firearm fully.

But just because it’s big doesn’t mean it’s heavy. When taken down, the blind  weighs just 19 pounds . It’s easy to carry around, so you don’t have to commit to one hunting spot all day long.

It’s made with durable, waterproof 150D fabric and supported by all-metal hubs and fiberglass poles. Set up and takedown are easy thanks to the blind’s  pop-up design . The solid construction will hold up season after season even after regular exposure to harsh weather.

The benefits of this blind’s visibility are easy to see. Each side has a big, unobstructed window with a shoot-through mesh covering. You’ll be able to see game easily with remaining comfortably concealed.

Adjusting the windows is simple and, most importantly, quiet. You can open and close the windows with just one hand. Plus, the  windows use straps instead of noisy zippers or Velcro .

The low-profile windows can be adjusted in multiple ways. I had no problem finding a comfortable, accurate shooting position for both bow and gun.

Like lots of hunters, I like the Big Cat’s unique Blood Trail camo design. It’s a detailed, three-dimensional replica of brown/red/gray foliage.

Despite the blind’s large size, it’s surprisingly portable. When folded down, it fits into the included backpack-style carrier. Also includes stakes for easy and secure setup. 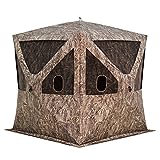 What We Wish was Different

Unfortunately, the blind isn’t completely zipper-free. There’s a full-length zipper in the corner which is used to create the entrance and exit. The zipper noise can potentially scare away game.

On the plus side, you can zip yourself in and then adjust the windows silently. Getting in and out of the tent is still a little awkward, but at least the zipper doesn’t need to be used often.

Another issue I had with the blind was the  relatively thin material . It’s waterproof but doesn’t provide much protection beyond that. Cold air flows through the tent pretty easily.

The thin material poses another problem.  High winds cause the tent walls to flap and vibrate . A moving blind can be easily seen and heard by any passing game.

The final potential problem was the steadfastness of the camo print. Although I didn’t experience this problem, other hunters did have complaints (as detailed below). In some cases, the Blood Trail camo fades into a shiny purple – and it can happen after just one season of weather exposure.

What Other Customers Say

People who purchased this blind have quite a few positive things to say about it. As you might expect, people generally love the large size. Larry E. said it’s a great choice if you want to stay in your blind all day without feeling cramped.

Bob Z. agreed. He said the  blind was big enough to camp inside . He also mentioned it was large enough to use a space heater safely.

It was common to find people who liked the blind so much they bought more than one. “Cityman” says he bought two blinds. He mounted one to a platform to use as a fixed blind and then uses the second one as a portable blind.

However, not all customer feedback was positive. The Big Cat does seem to have problems dealing with high winds. William said wind made the blind very noisy and visible. Teresa L. said her  blind couldn’t withstand 30 mph wind .

Another common complaint is related to camo fading. Mike N. said his blind faded significantly after just one season. The Blood Trail camo turned into a shiny purple, which was too visible for hunting.

Other buyers didn’t like the angle of the windows. Tara F. said they were hard to see out of. However, this is not a very common complaint. Most people seem to find the large windows to be highly visible and easy to both see and shoot out of.

We gave the Barronett Big Cat 350 a rating of 4.5/5 stars due to its large size, light weight, and great fit for groups of hunters.

The Barronett Big Cat is an excellent choice if you’re looking for a large blind you can comfortably sit in all day. It’s roomy, durable and only takes a few minutes to set up.

However, the Big Cat does not handle high winds very well. Many buyers complained that winds made the sides of the blind flap and wave. If the blind is moving and making noise, passing animals will be wary. Plus, sitting inside the blind when the wind is blowing can be an ear-shattering experience.

Another issue you’ll want to be aware of is the potential fading of the camo. Some buyers said the camo faded within a year. Unfortunately, if the camo on your blind does fade to a shiny purple, the blind will become unusable for all intents and purposes. Thankfully, this seems to be an infrequent issue.

The Barronett Big Cat 350 is a  great choice for groups looking to hunt together in style and comfort . It’s also one of the few blinds which cater equally well to both bowhunters and firearm users. Plus, the durable construction will keep the blind in great shape season after season. Overall, this big blind has a lot to like.

The Barronett Big Cat 350 is the #2 choice in our list of best hunting blinds.

The Barronett Big Cat 350 is the best choice for a large, tall blind - as long as you don't plan on hunting in high wind. Unsurprisingly, Amazon usually has the best price. The table below updates every day with the latest price - check it out.