Electric hunting vehicles have become quite popular due to their whisper-quiet operation and their ability to transport hunters, gear and game without the noise and odors typically associated with gas-powered vehicles. A new type of electric vehicle has been catching on in hunting circles that we thought you should know about.

In recent years we have seen electric bicycles, often referred to as ebikes, becoming more popular all over the world. Electric bicycles are a great method of Eco-friendly travel and allow for adding to the practical range of a standard bicycle or mountain bike, permitting you to travel further than what many people could comfortably do in a day by just pedaling. An ebike can be a great addition to your hunting bag of tricks, as the silent operation can get you in and out of the woods without your quarry ever being the wiser.

What is an Ebike

At it’s core, an ebike, or electric bike, is a regular pedal bike that has the additional benefit of being motorized. All electric bicycles have some type of integrated electric motor, used for propulsion, that operates off a rechargeable battery pack.

There are many different types of electric bicycles available. Some ebikes only offer a small motor that is designed to just assist the rider as the bike is pedaled. Higher-end electric bicycles with moped-like operation have larger and more powerful motors that can propel the rider without the need for peddling. Most electric bicycles will have a display to keep you apprised of how much charge is left in the battery and some will also estimate how much farther you can go on the remaining charge.

Most electric bikes have a pedal assist function that allows you to travel farther then you would be able to on the battery alone. The motors on these pedal-assist bikes are usually designed to operate only while the bike is being pedaled. Additionally, the pedal assist feature allows you to pedal the bike just like a non-electric bicycle, preventing you from becoming stranded miles from home, or a road, when the battery goes dead.

The distance range of electric bikes can vary greatly, with some of the higher-end ebikes, like the Delfast Prime, being able to travel over 100 miles on a single charge. However, the range of the typical electric bicycle is between 20 and 35 miles. Of course, the bigger the battery the farther the bike will travel before requiring a recharge. Top speeds of ebikes are typically between 20 and 35 MPH.

As with speed and range, price of electric bicycles can vary quite a bit. Lower end ebikes can be had for a few hundred dollars, but those bikes won’t have the same performance of the higher end ebikes. When shopping for an electric bike remember to always compare apples to apples and oranges to oranges.

Benefits of Using an Electric Bike for Hunting

There are many advantages for using an electric hunting bike, with the main benefits being they are smaller and less obtrusive. Other benefits include helping you to transport your equipment, handling challenging terrain, stealthy travel in and out of the woods and recovering game.

When outfitted with the proper racks, and maybe even a cargo trailer, an electric hunting bikes can help you get all of your camping and hunting equipment in and out of the woods. Most ebikes designed for off-road use will make short work of your tent, sleeping bag, air mattress, tree stand and miscellaneous gear. Even if you have to make a few trips, think of being able to get all your gear into the woods without having to pack heavy loads on your back.

For transporting equipment, a fat tire electric bicycle may have a slight advantage, as the wider tires will provide better traction and help to better distribute and balance the added weight of gear and game. Hunting ebikes vary somewhat in the total amount of weight they can transport by make and model, but there are many ebikes that can carry between 220 and 250 pounds. As just one example, the mid-level HaiBike SDURO HardNine 4.0 is a fairly lightweight and affordable 29-inch mountain e-bike that is suitable for off road use. The Hardnine 4.0 is capable of carrying 250 pounds and has a maximum estimated range of 70 miles before recharge.

An additional benefit of using an electric bicycle for transporting your equipment is your gear won’t pick up any of the big game spooking smells of gasoline and other odors wildlife has come to associate with danger.

For rough terrain, all electric hunting bikes are not created equal. Some work great on a flat, hard-packed trail or dirt road, but not so well going up a hilly trail covered with wet leaves, loose dirt and gravel. A good off-road electric bicycle will allow you to access hunting areas farther back in the woods than you would typically want to walk in a day.

Fat tire bikes with a mid-crank, or mid drive, motor drive system, like the QuietKat Warrior 1000, work well on rugged terrain having a lot of grades. Earlier ebikes typically employed a rear-hub motor that works just dandy over level ground, but just doesn’t have the torque, or power, that hunters need to climb up hills. However, the newer mid-crank motors produces enough torque to traverse the terrain on the way to your stand. However, everything is a trade off.

The other side of the coin is electric bicycles with traditional-width tires, usually in the two-inch range, will typically go farther on a charge as there is not as much rolling resistance on the ground. That is something you will want to keep in mind if you won’t be near an electrical source to charge the bike’s batteries every night. 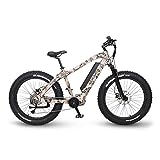 Obviously, one of the biggest advantages of using an electric bicycle for hunting is it will allow you to go over the river and through the woods with as little noise as possible. Electric bicycles will get you in faster, farther and with the least amount of disturbance than anything else on wheels.

Compared to a four-wheel drive truck or SUV, ebikes have no loud gasoline engines, two skinny tires that create less road noise than four wide ones and weigh only a couple of hundred pounds, with rider, as opposed to several thousand for that 4×4 and there are no doors to accidentally slam. Additionally, a bicycle sized vehicle creates a lot less visual noise and can easily be stashed in the brush where that wise old buck will be a lot less apt to notice it.

All of this makes for a much quieter ride thorough the forest, and its always easier to find your prize when it doesn’t know you are looking for it. You can check your trail cameras, scout areas, put up your tree stands and get to and from your stand all in stealth mode. You may even be able to get a jump on your buddies in the morning by leaving camp so quietly they won’t even know you are gone.

With a trailer attached to the back of your electric ride, there is always the option of putting that big buck in the trailer and walking beside the bike while the electric motor does all the work. That sure beats having to drag your deer out over dry ground. When selecting a trailer it is a better bet to go with a trailer model that has a single wheel at the back of the cargo area. This type of single-wheel setup will create half of the drag of a two-wheeled trailer and also have a much narrower profile for getting up and down the trail. Also, a single wheel in the middle of the trail won’t get hung up on every rock and stick in the woods.

Electric bikes come in a wide variety of shapes, sizes and weight-carrying capability. While most ebikes don’t look much different than traditional bikes, a higher end ebike will set you back a couple grand. Still, when you weigh all of the benefits of having an electric bicycle as a hunting vehicle, an ebike may be worth the cost. Of course, you can also use your electric bicycle for other things as well (like getting back into your favorite fishing hole.) As a final note, be sure you check local laws to determine if you can legally ride an ebike in your hunting area. Many places, like designated wilderness areas, do not allow the use of any type of motorized equipment.